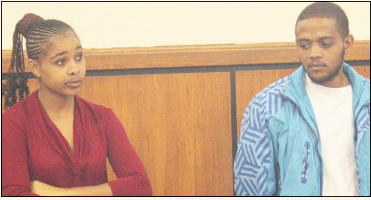 A WINDHOEK couple accused of robbing and murdering a NamPower engineer in his house in May this year are claiming that they spent an evening using drugs with their alleged victim, and that he was alive when they left his house after a fight.

After nearly six months in police custody following their arrest in connection with the killing of NamPower employee Benjamin Silombela, Muningandu Kaapama and Jorene Bezuidenhout revealed their versions of the events that preceded Silombela’s death in the Windhoek Magistrate’s Court yesterday.

The versions are recorded in sworn statements by Kaapama (28) and Bezuidenhout (27) that were provided to magistrate Jozanne Klazen in support of an application by the couple to be granted bail.

The couple are charged with counts of murder, robbery with aggravating circumstances and theft of a motor vehicle.

The state is alleging that they murdered Silombela (41) in his house in the Eros area of Windhoek on 24 May, robbed him by stealing items including a television from him, and also stole his Mercedes-Benz car.

A police officer investigating the killing of Silombela, detective inspector Joseph Ndokosho, told the court yesterday that Silombela was found tied up and gagged on a floor in his house after his car had been found abandoned at Okahandja.

Ndokosho said Silombela was found covered with a duvet. His hands were tied behind his back, his legs were bound, and his mouth was gagged.

He had died due to suffocation, Ndokosho said.

Ndokosho told the magistrate that cellphone contact between Silombela and Bezuidenhout led him to Bezuidenhout’s home in the Okahandja Park area of Windhoek.

In her house, three bank cards, clothing, a television remote control and house keys belonging to Silombela were found, he said.

Silombela’s cellphone was found with Kaapama’s father, who told the police Kaapama had brought the phone to his house, Ndokosho testified.

In the affidavits given to the magistrate, Kaapama and Bezuidenhout do not mention that Silombela had been tied up before they left his house.

Kaapama and Bezuidenhout both say they did not know Silombela before meeting him at a house in the Soweto area of Katutura, where they had gone to buy drugs.

Kaapama says he does not remember the date when that happened. According to Bezuidenhout, that was on the evening of 23 May.

Bezuidenhout says she and Kaapama had gone to the house in Soweto to buy a drug made of cocaine, which she refers to as “klip”.

Kaapama and Bezuidenhout both claim they and Silombela smoked drugs together and went to the Golgota area with him to buy more drugs, before they went to his house, where the drug-taking continued.

Kaapama says at Silom­bela’s house he was taking a smoke break outside when he heard Bezuidenhout screaming. He says he ran into the house and found Bezuidenhout lying half-naked and unconscious on Silombela’s bed.

Bezuidenhout claims she found Silombela standing naked in his bedroom when she came out of an adjacent bathroom, and he then made sexual advances to her.

She says she rebuffed him before Kaapama entered the room.

According to her, there was a fight between Kaapama and Silombela before she and Kaapama left the house.

Kaapama says he and Silombela were involved in a physical fight during which they exchanged punches.

He further says during the fight Silombela fell to the floor, and he then “used an iron rope to keep him down”.

He held Silombela by his throat and, after another exchange of blows, left Silombela’s house, Kaapama says.

Kaapama and Bezuidenhout both claim Silombela was alive when they left his house, and deny that they killed him.

The bail hearing is continuing.