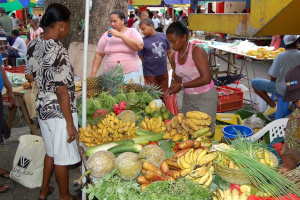 Arnphey said that when there is inflation, the purchasing power of the general public is reduced. (Gerard Larose)

(Seychelles News Agency) – The 12-monthly average inflation rate in Seychelles as of August 2022, stands at 4.78 percent driven mostly by the non-food group which makes up almost 86 percent of the weight of commodities in the Consumer Price Index (CPI) basket.

The Seychelles National Bureau of Statistics (NBS) makes the compilation by using a basket of goods and services classified into three main groups – fish, other food and non-food.

A senior statistician at the National Bureau of Statistics (NBS), Kirsten Arnephy, told SNA that “as a highly import dependent country for most of our food and non-food commodities, external shocks have a tremendous impact on the price of commodities on the local market.”

Another factor that potentially contributes to price fluctuations is the exchange rate of the Seychelles Rupee vis-a-vis other major international currencies that the country trades in. These are transportation costs, increases in the costs of raw materials imported for use in local production and labour costs.

“On the whole, because Seychelles has no control over what happens on the price of commodities on the global market, it is mainly the external factors that contribute to inflation,” said Arnephy.

She further outlined that when there is inflation, the purchasing power of the general public is reduced.

“This is because with the same income, they will get fewer goods and services, and this in turn will affect their consumption levels. Choices will have to be made and consumption patterns adjusted based on priorities.”

In the non-food group, housing, water, electricity and gas and transport account for almost 28 percent of the entire basket. According to data provided by the NBS, a price increase of 3.14 percent was recorded in August 2022 as compared to August 2021.

“The categories in this group that recorded the most notable increases were housing, water, electricity and gas which recorded the highest increase of 13.47 percent, followed by transport at 6.11 percent,” elaborated Arnephy.

From August 2021 to August 2022, there has been a decrease in prices in the fish group by 0.02 percent. During the same period, a price increase was registered by 0.96 percent in the ‘other food’ group.

“However, there were decreases recorded in some categories, namely ‘Meat – fresh, chilled, frozen’ by 4.13 percent, ‘Non-alcoholic beverages by 3.93 percent, ‘Milk, cheese and eggs’ by 1.90 percent and ‘Food products n.e.c’ [not elsewhere classified] by 1.33 percent,” she added.