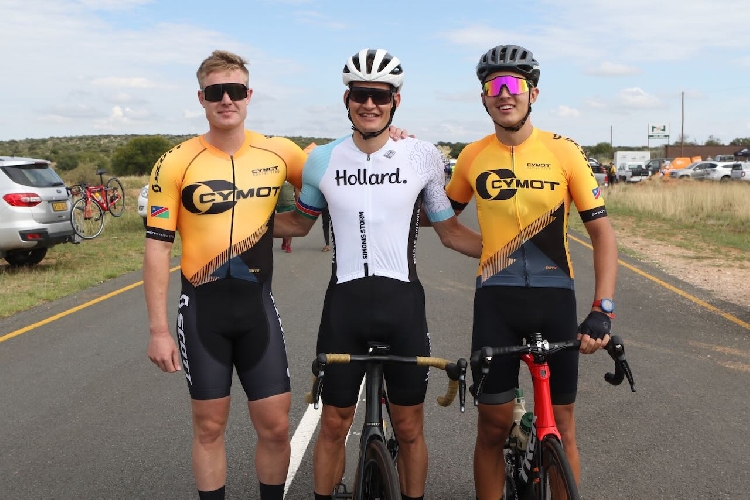 DRIKUS Coetzee and Vera Looser took the honours at the first Nedbank Windhoek Pedal Power race of the season on the Dordabis road yesterday.

Coetzee put in a great performance, finishing more than two minutes ahead of the Cymot pair Kevin Lowe and Jean Paul Burger, while Looser beat a bunch of five riders in a sprint to the line.

In the men’s race over 100km, Coetzee, riding for Team Hollard, and the Cymot pair broke away from the pack early on.

They worked together on the way to Dordabis, but at about 15km after the turnaround point, Coetzee broke away to take the lead on his own. He turned on the power, and steadily increased his lead, before eventually finishing by more than two minutes ahead of Lowe, who beat Burger into second place.

Coetzee said it was a good race.

“The first race is always a good one, everyone is excited and you don’t really know what to expect. We had a breakaway – we were about five or six guys which got reduced to three, and then on the way back I managed to open a gap and just rode to the finish line, so it’s a good start to the season,” he said.

The 17-year-old Lowe said it was tough going.

“It was a super tough race – going out it was pretty much a three-man breakaway from the beginning. We worked pretty well together all the way till the turnaround point and then about 14km after the turnaround point Drikus attacked us and I just couldn’t stick with him any more and I cramped really badly. Luckily JP was just behind me so then we worked really well together. JP did most of the work because I was pretty much spent so big kudos to JP,” he said.

Lowe also told us more about his 2022 season when he was ranked as the top under 18 rider in the world at the end of last year.

“I had a few good races in Europe, and with all the UCI races we had this year, I could gather enough points to work my way up on the UCI ranking list. So come the new year all the guys who were older than me, basically the first 12, because I was 13th at the end of last year – those 12 moved on to the u23 category, so now I have the most points in the junior field and Im pretty stoked about that,” he said.

“I’m going to work really hard to try and maintain that ranking – I want to do a lot of MTB races and be at all the important UCI races so that I can maintain my lead and get enough points to hopefully then be still ranked number one when I go over to the world champs in August,” he added.

“It was actually quite a good race against he rest of the women, who are really picking up – it’s good competition and its also team tactics, so at the end it came down to a sprint with five of us and I managed to take the sprint,” she said.

“But what is actually really amazing is that the five girls who were in the front are also going to the Africa Champs in Ghana in two weeks time, so it’s great to see that they are all really in good shape with that coming up,” she added.