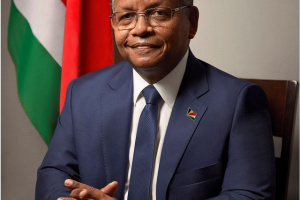 Ramkalawan, who will leave the country on November 5, will head the Seychelles delegation. (State House)

President Wavel Ramkalawan will lead the Seychelles delegation at the 27th Conference of the Parties (COP27) of the United Nations Framework Convention on Climate Change (UNFCCC) scheduled to take place November 6-18 in Sharm el-Sheikh, Egypt.

State House said in a press statement on Friday that Ramkalawan, who will leave the country on November 5, will be among the heads of state and government to participate in discussions at the Sharm El-Sheikh Climate Implementation Summit (SCIS).

“This will include the official opening ceremony, round tables, high-level side events, and delivery of national statements. Building on the outcome and momentum of COP26 in Glasgow last year, nations are expected to demonstrate at COP27 that they are in a new era of implementation by turning their commitments under the Paris Agreement into action,” said State House.

During his mission in Egypt, Ramkalawan will also engage in other side events and bilateral talks important for Seychelles, an archipelago in the western Indian Ocean.

The hosting of COP27 in Sharm El-Sheikh will mark the 30th anniversary of the adoption of the United Nations Framework Convention on Climate Change. COP27 will seek to renew the commitment made in the Paris Agreement made in December 2015.

This annual conference will bring countries together to promote decisive actions toward achieving the world’s collective climate goals as agreed under the Paris Agreement and the United Nations Framework Convention on Climate Change.