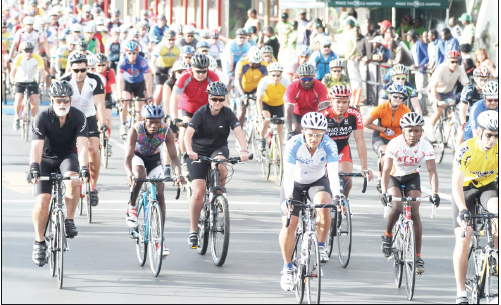 THE City of Windhoek will today celebrate World Car Free Day to reduce its carbon footprint.

This was announced in a statement issued by City of Windhoek.

According to the statement, the event aims to raise awareness of the effect of carbon emissions on the climate and ways for residents to reduce their carbon footprint.

“The theme for the day is ‘Reducing our carbon footprint’, with the main activity being a five-kilometre cycle, run, and/or walk for City of Windhoek employees and Windhoek residents,” says the City of Windhoek.

The event, which will follow a designated route with water stations and a police escort, will start at 08h00 this morning from the City of Windhoek’s Khomasdal Customer Care Centre in Richardine Kloppers Street (off Florence Nightingale Street) and end at 09h30, with a short closing ceremony in the municipality parking area on Independence Avenue.

Windhoek mayor Sade Gawanas said City of Windhoek employees will set the example on Car Free Day, and challenged all corporate organisations to do the same.

“Windhoek Car Free Day promotes the use of public transport, mass transit (bussing), car-pooling, cycling, jogging and walking to work, instead of each of us using our private vehicles, in an effort to reduce our carbon footprint,” she said.

Organiser of the event Lorraine !Gaoses said Windhoek is becoming motorised, to such an extent that air pollution from vehicle fumes are becoming a concern.

“In addition to raising awareness on air pollution, the event will also promote non-motorised transportation as a green alternative,” she said.

!Gaoses said Windhoek residents and corporates who wish to take part in the event can register free from 07h15 to 07h55 at the starting point in Khomasdal.

She said participants who take part and finish the race at the head office in Independence Avenue, will receive digital certificates in recognition of their participation, while the City of Windhoek division with the most participants will win a floating trophy for biggest carbon saver of the day.

“Participating corporate organisations are encouraged to bus their employees to the starting point and participate in their corporate colours,” she said.

It is expected that this year’s first Windhoek Car Free Day will be the launching pad for the City of Windhoek to celebrate the event on a yearly basis.