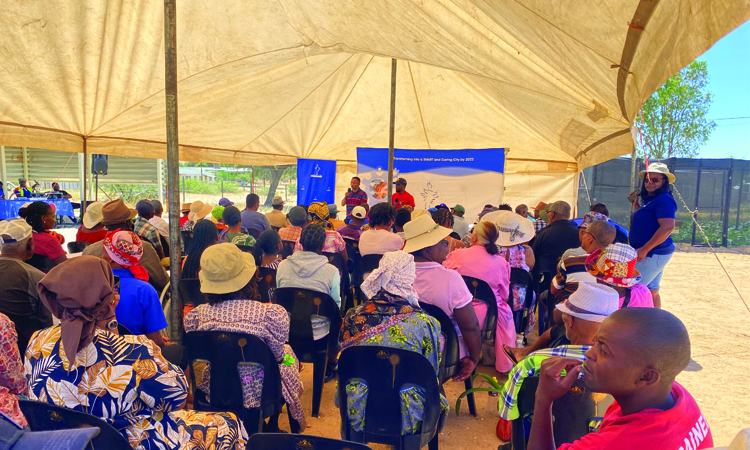 GROOT Aub residents have call out the Windhoek municipality over its “go-to-hell” attitude and lack of delivery at the settlement.

This comes as community members have turned to illegal connections as they continue to struggle with access to water and electricity.

City of Windhoek officials from most departments, along with three of its councillors met with Groot Aub residents over the weekend.

The people of the settlement admitted to illegal water pump and electricity connections, saying the city has left them with no other choice.

In certain areas of Groot Aub, like Tiger Hills, residents have illegally drilled a borehole.

City officials, including councillor Job Amupanda, did not take kindly to this, but residents explained that the lack of response to the community has left them with no choice.

He said a special council meeting would be held at Groot Aub to discuss the community’s needs and take decisions.

“When we applied for the water, the City of Windhoek said we are not on the settlement’s map, so we cannot get help – almost like ‘go to hell’,” headman Petrus Eiseb said.

He said he has lived in the area for many years, and the problem has been consistent.

“Yes, we tried to make a borehole for the community at Tiger Hills. The City of Windhoek came with eight police cars. They wanted to arrest the traditional authority,” Eiseb said.

He said Windhoek mayor Sade Gawanas had to step in to hear their pleas.

“She wanted to cry that day because of the distance the elderly people have to walk. But they stopped that borehole we made, because they cannot bring us water,” he said.

Eiseb said the resolutions have always been short term.

“They came and removed the tanks, and that’s why we grabbed the water. I am sitting with more than a 100 people on that side,” he said.

A resident of Heavenly View in the Groot Aub area said they have been struggling with access to water for nine years.

“They told us to be patient. Up to now, nothing has happened, and we don’t have a low flow or something. We don’t have anything at all,” he said.

The resident, who chose to remain anonymous, said they have written letters to no avail.

Community activist Demetroe Beukes read out a petition on the settlement’s demands.

“We demand that the City of Windhoek give us land for youth employment activities,” he said.

The settlement has been waiting for electricity supply for the past 11 years.

In August, the council gave the municipality permission to make funds collected available towards network contribution for the takeover of assets.

“ . . . to be paid by the council in addition to any secured loan, the Electricity Control Board (ECB) tariff collection provision and grants,” the agenda stated.

This would, however, be subject to council approval once each settlement’s asset valuations and negotiations have been completed.

City of Windhoek officials at the meeting also explained bottlenecks they are experiencing, including on a court case involving one of the residents’ land claims.

This prevents the city from being able to plan for land issues and allow brick houses to be built, officials said.