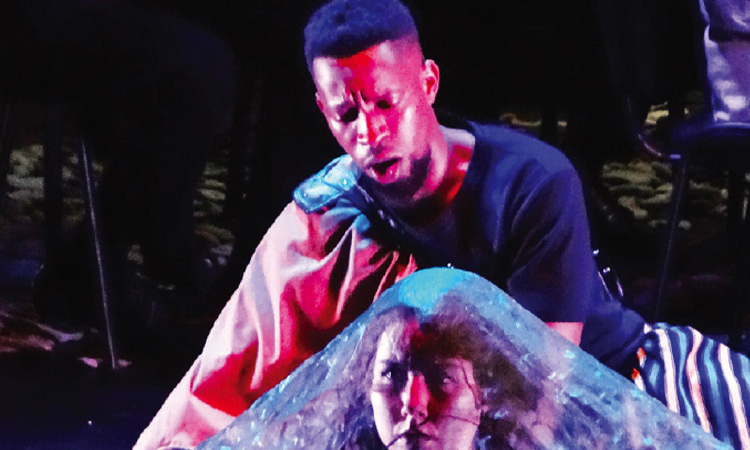 THE tragic tale of ‘Chief Hijangua’ came to life in a thrill of soaring vocals, striking staging and orchestral prowess at the National Theatre of Namibia last Friday.

Premiering to an appreciative audience who gave standing ovation, some dressed to impress, the German-Namibian production made history as Namibia’s first opera.

Sung in Otjiherero and in German, the opera begins in a prosperous and peaceful village, in a shiny valley behind a mountain of water.

Here, Hijangua has found love but Matijua, his paramour, is betrothed to his brother Nguti. Unable to bear Matijua being with another, Hijangua runs away, traversing the wilderness all the way to the ocean where a lamb and a jackal appeal to the light and the dark in his nature.

As he collapses with thirst and exhaustion, Hijangua is rescued by a German missionary/pastor and his daughter Maria who offer him a home near a military fort where Hijangua learns the ways of their people, Christianity and of guns.

Wondrously providing the music to a story of love, betrayal and the devastating effects of German colonialism, the Namibian National Symphony Orchestra is transportive as a crop of remarkable soloists and a dedicated choir (Vox Vitae Singers) provide narrative and texture in swells of soul-stirring arias and rousing ensembles.

From the jubilant sounds of a thriving Namibian village to the heartrending tones of the catastrophic finale, ‘Chief Hijangua’s’ music – composed by Eslon Vakomboka Hindundu – is the opera’s brightest star among stars.

For all in attendance, to be present at the premiere of an opera sung in Otjiherero was an experience both majestic and historic as ‘Chief Hijangua’ bent the classic towards the contemporary rendering of Namibia’s German colonial past replete with spirits of nature and the sound of African drums amid modern, minimalist staging and costume design.

Though the opera is set within this colonial history, it only offers an overture to the staggering loss of land, the violence, the destruction of families and the erasure of indigenous beliefs, customs and traditions that is to come.

However, in the libretto and poetic surtitles written by Nikolas Frei, the ridiculousness of the idea of “discovering” so-called new lands is clear.

“Mighty ships are travelling the endless circle of the seas, they go, discover, and orbit the worlds of which we already know.”

Shrewdly political and employing masks live-quoting artist Isabel Katjavivi’s ‘They tried to bury us’ which recalls the Ovaherero and Nama genocide (1904 to 1908) and links to the then imminent future, ‘Chief Hijangua’ is also blind cast, race swapping Namibian villagers and German missionaries.

Mbo as the German pastor provides some comic relief as he laments Namibia’s heat and considers a return to Wuppertal and Rheinaldt Tshepo Moagi as the German major is styled as bumbling and neglectful of his love-struck wife Maria, who is clearly toying with the idea of an affair across the colour bar.

Monde Masimini as Hangane is the opera’s initial chief and his fate is one signaling the collapse of an old world and the ushering in of something new and defiant of established cultures which will irrevocably transform indigenous communities.

A commendable feat by Hindundu, who adds something distinct and profoundly Namibian to opera’s global canon, ‘Chief Hijangua’ elevates vocal, musical and theatrical production talent from Namibia, Germany and South Africa while eloquently reimagining a genre through the history, mythology, scenes and symbolism of the land we call home.