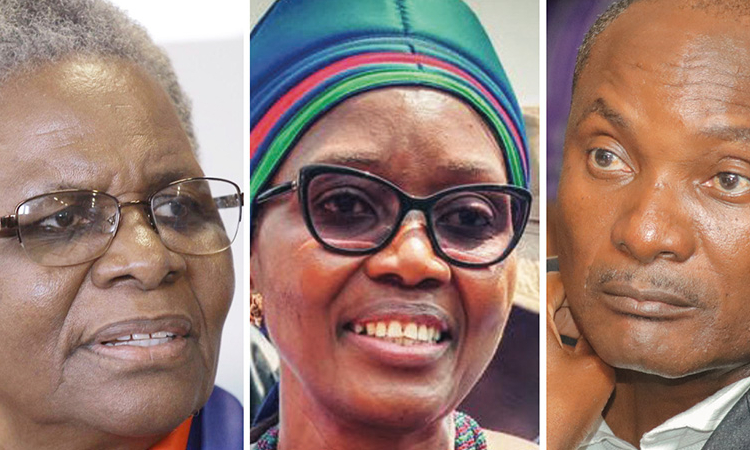 PRESIDENT Hage Geingob and other Swapo leaders were yesterday locked in a politburo meeting which discussed allegations of a fraudulent delegates list and attempts to squeeze in voters who will win them the election contest.

Whoever wins that battle is going to represent the ruling party as the presidential candidate, competing against politicians such as the Independent Patriots for Change (IPC) president, Panduleni Itula.

Nandi-Ndaitwah, Kuugongelwa-Amadhila and Shifeta are allegedly claiming to have enough votes to win the race.

However, the run into the congress, which started yesterday, is dominated by who should attend the congress.

Complaints about tampering with the delegates list reportedly resulted in another meeting yesterday, chaired by Geingob to discuss claims that the list of delegates attending the congress were not supposed to be there.

Shaningwa is accused of tampering with the voters’ roll to benefit her faction and to defeat her competitor Armas Amukwiyu, who is aligned with Kuugongelwa-Amadhila.

The Namibian reported this week that the Swapo central committee nullified or removed some delegates from Oshikoto, Hardap, //Kharas and Otjozondjupa, who were set to attend the congress which started yesterday.

The Grootfontein district in the Otjozondjupa region held its district conference yesterday and replaced all four delegates who were elected to go to the congress.

To some, the efforts are aimed at wrestling votes from vice president Nandi-Ndaitwah and Shaningwa’s camp. For others, it’s a mess created by the infighting camps.

Party insiders see the latest move as an attempt to throw delegates out at the last minute, in favour of the preferred candidates. Some of the disqualified delegates were already in Windhoek yesterday.

People familiar with the scramble for power said the only logical conclusion is that the race for the vice presidential position is tight, and every extra vote counts.

To some, the attempt to squeeze in new delegates appears to be backfiring.

Vice presidential candidates Kuugongelwa-Amadhila and Shifeta are said to have protested about the issue of delegates.

Despite Kuugongelwa-Amadhila and Shifeta reportedly not being on speaking terms, they are allegedly on the same page on the issue of delegates.

Nandi-Ndaitwah and Shaningwa’s campaign manager, Kaire Mbuende, told The Namibian yesterday that the delegates removed from the list are those who did not qualify to participate in the congress.

“The question of which camp they are from is immaterial. The most important thing is, did they comply with the provisions? There is a special case of Grootfontein, which is still under discussion, I wouldn’t really go into that because it’s under discussion,” Mbuende said.

The nullification of Grootfontein’s list of delegates earlier this week saw a Swapo’s central committee meeting, chaired by Geingob, resolve to set up a committee, led by Swapo’s legal secretary Albert Kawana, to investigate irregularities around the list of delegates attending the congress.

Andreas told The Namibian yesterday that the district executive committee which elected new delegates was illegal and did not meet the quorum.

“Comrade (Albert) Kawana did not have power to nullify a decision that was made by the highest decision making body in the district, which is the district executive committee,” Andreas said.

The Grootfontein district executive committee wrote to Shaningwa yesterday to say the elections violated the Swapo constitution. The district also accused the Swapo secretary for legal affairs of dividing the party.

“He knows the law, yet for his political manipulative ethics is behaving in a serious unbecoming manner, whereas he failed to acknowledge us as district executive committee members and the district in general, moreover, those affected by his decision, in order to hear from both sides,” the district said.

PARTY IN DENIAL OVER FISHROT

The ruling party has been dominated by the Fishrot corruption scandal, however, the party has been in denial on the issue, including Swapo spokesperson Hilma Nicanor.

She says none of their members have been convicted of graft as yet and reiterated that they believe in the notion of someone being innocent until proven guilty.

Nicanor was speaking to Desert Radio ahead of the Swapo elective congress yesterday.

Nicanor said one cannot find someone guilty on the basis of allegations.

“If it is proven, in a competent court of justice, that this person was found guilty, then, of course, the party can take its own measures against such a member. It cannot just be because of allegations that are being made,” Nicanor said.

She said Swapo, as an organisation, has never engaged in corrupt practices and those who are painting Swapo as a corrupt party are wrong.

“There have never been cases where Swapo as an organisation has engaged in corrupt practices. Let those who have information of corruption take it up with the relevant institutions,” she said.

Nicanor further said there is no division within the party, as unity is of cardinal importance.

Political analyst Marius Kudumo said yesterday that Swapo should articulate its stance on corruption and the strategy it wishes to use to address the scourge going into the 2024 general elections.

Kudumo said the resources of the country are not used for their intended purpose but are diverted to, for instance, fund Swapo political campaigns.

He said the issue of corruption is a major concern in the country and in political parties, especially in the 2024 presidential and National Assembly elections, and parties are expected to state their positions regarding corruption, as well as the strategies they will use to address these matters.

“I am stating that whoever emerges [at the congress], the issue of ethical and moral leadership is going to become paramount in Namibia going forward, and this is not only talking about it but demonstrating it, internalising it and living by it,” Kudumo said.

Also speaking to Desert Radio, former University of Namibia constitutional law professor Nico Horn said it was unpredictable who would win at the congress. However, he said he believes there is a real competition for the vice president position.

It was a genuine human error – Namibian Sun editor