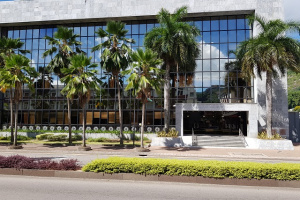 (Seychelles News Agency) – The Central Bank of Seychelles (CBS) will maintain its monetary policy rate relaxed at 2 percent during the first quarter of 2023 while keeping a close eye on international developments for quick response if needed.

On December 29, CBS’ board decided to maintain an accommodative stance in its monetary policy rates having taken into account both international and national economic developments.

The bank’s governor, Caroline Abel, told reporters in a press conference on Friday that inflation has been an economic point that has worried the whole world in 2022 and will continue to do so in 2023. With global inflation that has gone above the accepted level of 2 percent, the world’s top central banks – the Bank of England, the Federal Reserve Bank of New York and the European Central Bank – had to tighten their monetary policies.

“With such actions taken by central banks in 2022, with more expected in 2023, inflation will be moderate in 2023. One of the observations made is that in America, it seems that inflation will be lower faster than in Europe. This is because Europe is being greatly hit by the war in Ukraine, as it depends greatly on energy that comes from Russia and this is a factor that has driven prices in Europe,” said Abel.

The European market is one that is of great importance to the tourism industry in Seychelles. With a looming possibility of a recession on the European continent in 2023, Seychelles’ main tourism markets are expected to have a lower spending power, which will affect their ability to afford a holiday.

In 2023, global oil and food prices are expected to remain elevated, amidst uncertainties.

“At the Central Bank, whenever we take our decisions, we always take the most serious case scenario, being where prices are going up, so that we can be ready to make quick adjustments in the policy when needed,” said Abel.

On the local scene, the tourism industry continued to drive the economy of the Seychelles, an archipelago in the western Indian Ocean, in 2022.

“In general, revenue coming from the tourism sector this year has been higher than even before the pandemic. From January to November the sector has brought €849.4 million, and this is an increase of 96 percent as compared to the same period in 2021,” said Abel.

Inflation has also been a point of concern for the local central bank. During the past 12 months, the average inflation rate stood at 3.4 percent.