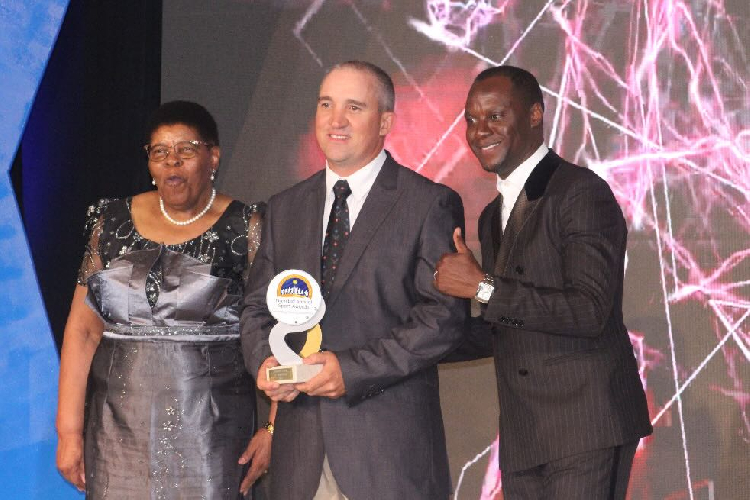 JANNIE Meuwesen was at a loss for words after being crowned the best athlete in the country during the annual MTC Namibia Sports Commission Sport Awards held at Lüderitz on Saturday.

The archery world champion bagged the sports star and sportsman of the year prizes as reward for his exploits.

“I wasn’t expecting this. This little town of Lüderitz, you made me who I am today,” Meuwesen said when picking up his second sportsman of the year award.

He first won the prize in 2019 when he broke a series of records en-route to claiming African Regional Field Archery Championships gold in Zambia.

Defending his Field Archery World Championships title in Estonia in August earned him the double recognition in front of his adoring home support on Saturday.

“I will do my best again next year, and this time in Brazil. Hopefully, I can do it again. Thank you, Lüderitz,” he said, closing the glittering awards reception.

The decorated Johannes, who added Commonwealth Games bronze to her vast medal collection this year, said her son and divine inspiration keep her going.

“It has been a long journey. I have been accompanied by God, because without him, I would not be able to achieve this since I have been doing so well consistently,” Johannes said.

“I would like to thank my family, especially my son who has been encouraging me, saying ‘mommy please make me proud’. Honour, I dedicate this award to you.”

Fellow veteran Ananias Shikongo won the sportsman with disability prize. Shikongo dedicated his award to his late father, who died in October.

“I would like to thank my guide [Even Tjiuiu] the big gun, because I would not be able to get this without him. This trophy is dedicated to my late father. It was a difficult year. The fire must keep burning even when he is no longer here. So, I will keep on travelling on the track and make Namibia proud,” said Shikongo.

Christine Mboma, whose year has been disrupted by injury, won the junior sportswoman award, with Daniel Hahn taking the junior men’s prize.

“This was a difficult year and I managed to do my best. I want to thank my sponsors and everyone who helped me. Thank you so much everyone who supported me during the difficult times,” said Mboma.

Brave Warriors hitman Peter Shalulile was rewarded the best star in the diaspora award for his Mamelodi Sundowns exploits.

The other winners are as:

Three die at Swakopmund – The Namibian

Is This The End? – The Namibian