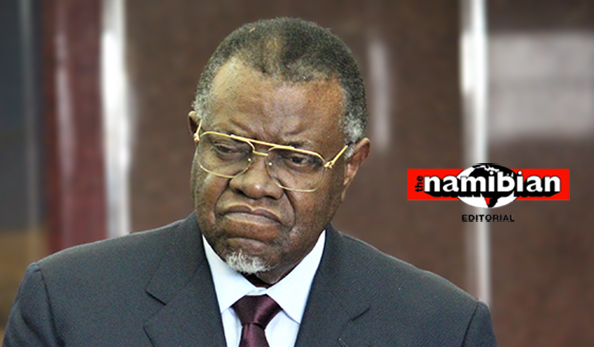 AT THE END OF November last year, president Hage Geingob signed the access to information legislation to pave the way for the bill to become a Namibian law. The law was confirmed in the Government Gazette of 28 December 2022.

This is a step worth celebrating. It has taken the Swapo-led government and Geingob personally a good part of 30 years since they promised to implement measures to make it easy for the public to access state information.

Information is arguably the greatest self-empowerment tool. Easy access to public interest information can determine the levelling of the playing field. It is perhaps the reason people in power and those with access to patronage have been reluctant to promote easy access to information simply to feed greed and opulence.

On paper, Namibia’s Access to Information Act (ATI) of 2022 can open the doors for citizens to participate more actively in the governance of the country.

The law strengthens the constitution’s key section on fundamental human rights and freedoms, especially freedom of speech and expression, as well as freedom to practise one’s preferred occupation, business or trade, which is key to being a productive citizen.

While Geingob has finally cleared the hurdle by enacting a law that forces state and private institutions to proactively share information that is in the public interest, a sterner test lies ahead.

Since taking over the reins of power from the apartheid regime in 1990, Swapo leaders have often choked at crucial stages of implementing measures that promote citizens’ informed participation in democracy and good governance practices like anti-corruption.

It took the government until 2005 to implement the Anti-Corruption Commission, going so far as ensuring that the institution was toothless against systemic corruption and abuse of state power.

Even a watered down whistleblower law signed in 2017 has yet to become operational because there is no political will to fund its key component of witness protection.

We urge president Geingob not to leave it to the next generation of office-bearers to implement his marquee ATI law.

He should drive this one to its logical conclusion before leaving State House.

Mr President, if you do nothing else, show that the final phase of a Presidency doesn’t have to be a lame duck stage, and get the access to information agency operational.

Walk the talk of your mantra that processes, systems and institutions are indeed the foundations of good governance architecture.

We can teach Swapo vice president Netumbo Nandi-Ndaitwah very little about political machinations. But she should be forewarned to remember the expression “power corrupts and absolute power corrupts absolutely”.

Having been re-elected as the ruling party’s vice president confirms Nandi-Ndaitwah as Swapo’s candidate with the advantage to be voted Namibia’s state president in 2024.

So, it is worrying that Nandi-Ndaitwah and her campaign manager Kaire Mbuende are brushing aside concerns that Namibia’s presumptive future president accepted major gifts that may have been offered in expectation of some payback in future.

Why would people gift Nandi-Ndaitwah cattle and money after she was confirmed as the person with a strong possibility of becoming Namibia’s next president? In fact, how transparent was the funding of Nandi-Ndaitwah’s campaign and that of other candidates in Swapo as well as the other parties?

In his seminal work, psychologist Robert Cialdini outlines six key universal principles of influence. Reciprocity tops the list. It’s human nature to give something back to someone who has given something to you.

Mbuende defends Nandi-Ndaitwah as incorruptible. She may well be considered clean. But she should know it is easy to be compromised.

More importantly, Swapo, other parties and thegovernment must put in place measures to regulate campaign funding and gifts to politicians to minimise the chances of buying political influence by those with resources.

North-central regions only make up 3% of tax base

Prime minister back in Swapo CC