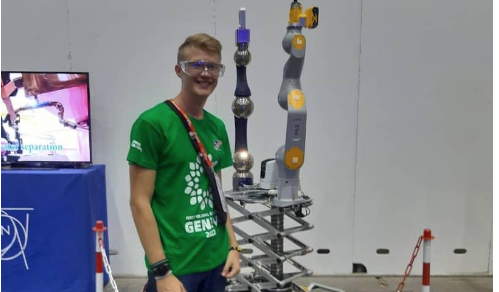 THE late Windhoek High School pupil Benn Visser (17) was developing a robotic prosthetic arm for one of his friends who lost her arm in 2021.

The Grade 11 pupil died at home in Hochlandpark, Windhoek, on Saturday after a failed electronic experiment when a BB gun gas cylinder exploded on his chest.

A BB gun is a type of air gun designed to shoot metallic spherical projectiles called BBs, which are approximately the same size as the BB-size lead bird shots use on shotguns.

Speaking to The Namibian yesterday, his father, Leon Visser, said Benn had dreams of becoming a mechatronics engineer

“He had a growing interest in fixing electronics and programming, stuff that others couldn’t do,” Visser said.

Visser added: “He (Benn) was very adventurous and always wanted to go on adventures, like exploring caves, old mines, mountain climbing and hiking. We did that with him and his friends.”

Narrating how his son believed in his future as a scientist in Namibia, Visser added that his son had a passion for everything he believed in.

“He was always tinkering with old radios, TVs and devices […] taking them apart and storing up all the small bits and pieces he could salvage. Over the past years, he repaired a 3-D printer that was in disrepair.

“His next step was to use the 3-D printer for laser engraving after he purchased a strong enough laser to connect to the printer,” Visser said.

He added, “He was also part of Team Namibia that took part in an International Robotics Olympiad in October 2022 in Geneva, Switzerland. One hundred and eighty-eight countries took part and Team Namibia came seventh in their alliance with three other teams. It was hosted by First Global’s STEM (science, technology, engineering and maths) initiative.”

The Namibian police earlier reported that Benn and his 17-year-old friend, Daniel Joubert, were allegedly doing experiments which produced a non-violent explosion. They would then put the cylinder to move on the washing line while burning.

“Some of his hobbies were programming and experimenting with electronics, batteries, engines and anything he could find. We had to actually call him up to three to four times to get his attention when he was focused and busy on one of his projects,” Visser said.

He added: “He kind of took over a part of my garage and work bench with all of his ‘stuff’.”

Visser said the experiment that led to the tragedy is something he did usually during his free time, experimenting with all kinds of interesting things.

“He also worked during some holidays at SatCom in Windhoek, where he learned and experienced real development and engineering. He wanted to study mechatronics engineering at the Namibia University of Science and Technology or Stellenbosch University,” Visser said.

He said Benn has been good friends with his younger brother and the family enjoyed his personality and character.

“He and his brother, Schalk, were good friends, not only brothers. Schalk looked up to Benn as his hero and big brother that he was very proud of. We, as a family, enjoyed his personality and character,” Visser said.

She said Benn was a role model to some of his schoolmates.

“When you talk about a role model student, he was a role model in all ways. If you talk about manners, I don’t think there is a kid with manners like that, well mannered,” she said, adding that he was loved by everyone from his fellow classmates to the school staff.

“His death is a big loss,” De Beer said.

Meanwhile, the Genius Robotics Club (GRC) team mentor, Dennis De-Abreu, has said he was astonished by Benn’s knowledge in science.

“Before the challenge in October last year, I remember when we would meet to work on the robot that the team would take to Geneva, we would discuss the latest news on science. He was creative in his methods, and with his humour and contagious laughter, definitely eccentric,” De-Abreu said.

“Benn was a young and intelligent kid. I only had the chance to really see him express himself through his peers and by doing what he loved – building robots.

“He will always be remembered as part of the GRC family, where he played a role in making a change in the lives of others,” Griebel said.

“My connection with Benn was brief, but memorable. Benn was among the high school pupils from 180 countries who competed in Geneva last year, representing Namibia in the yearly First Global Olympics-style robotics Challenge (FGC). His efforts in the team were selfless and this saw Namibia getting to the quarter-finals of the challenge, “ said Funmilayo Akpokiniovo,a professor at the University of Namibia who travelled with them as the team manager.

Namibia, others participate in climate platform