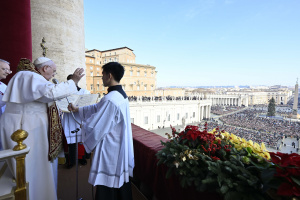 This handout picture taken and released on December 25, 2022 by Vatican Media, shows Pope Francis delivering his Christmas ‘Urbi et Orbi’ – to the city and the world blessing, as he stands on the balcony overlooking St. Peter’s Square at The Vatican. Pope Francis on Sunday appealed for an end to the “senseless” war in Ukraine, in his traditional Christmas Day message broadcast around the world. (Photo by Handout / VATICAN MEDIA / AFP)

(AFP) – Pope Francis on Sunday appealed for an end to the “senseless” war in Ukraine, in his traditional Christmas message from St Peter’s Basilica at the Vatican.

The 86-year-old also warned the 10-month-old conflict was aggravating food shortages around the world, urging an end to the use of “food as a weapon”.

The head of the Catholic Church addressed thousands of faithful gathered in St Peter’s Square, some of them holding Ukrainian flags, before delivering the “Urbi et Orbi” blessing (“to the city and the world”).

He has repeatedly called for peace ever since Russia invaded Ukraine in February, condemning the war but seeking to maintain a delicate dialogue with Moscow.

In his address from the central balcony of St Peter’s, he recalled “our Ukrainian brothers and sisters who are experiencing this Christmas in the dark and cold, far from their homes”.

“May the Lord inspire us to offer concrete gestures of solidarity to assist all those who are suffering, and may he enlighten the minds of those who have the power to silence the thunder of weapons and put an immediate end to this senseless war!”

“Tragically, we prefer to heed other counsels, dictated by worldly ways of thinking”, he added, recalling “with sorrow” that “the icy winds of war continue to buffet humanity”.

“Our time is experiencing a grave famine of peace also in other regions and other theatres of this third world war,” he said.

He referenced numerous countries in difficulty this Christmas, whether due to conflict or another crisis, from Afghanistan to Yemen, Syria, Myanmar, the Israeli-Palestinian conflict, Lebanon and Haiti.

For the first time, he also called for “reconciliation” in Iran, rocked by women-led protests for the past three months.

The pope also urged those celebrating Christmas to remember all those “who go hungry while huge amounts of food daily go to waste and resources are being spent on weapons”.

“The war in Ukraine has further aggravated this situation, putting entire peoples at risk of famine, especially in Afghanistan and in the countries of the Horn of Africa,” he said.

“We know that every war causes hunger and exploits food as a weapon, hindering its distribution to people already suffering.

“On this day, let us learn from the Prince of Peace (Jesus Christ) and, starting with those who hold political responsibilities, commit ourselves to making food solely an instrument of peace.”