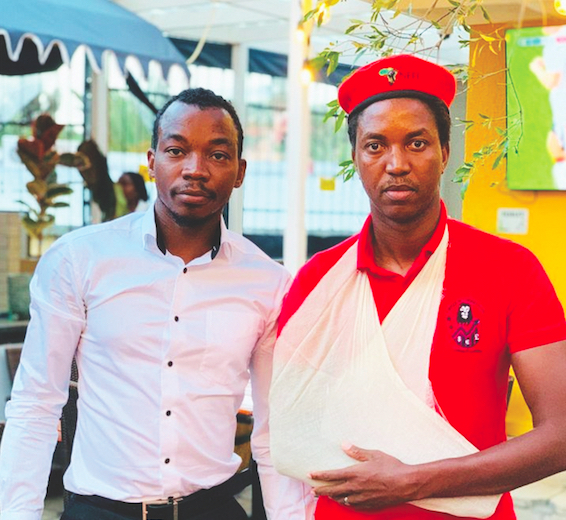 ACTIVIST Michael Amushelelo’s lawyer, Kadhila Amoomo, is demanding N$750 000 from the police after Amushelelo was allegedly injured during his arrest on Wednesday.

“Our client herein demands, as we hereby do on his behalf, compensation in an amount of N$500 000 as remedy for the pain and suffering endured at the hands of your members, as well as for the violation of his dignity,” Amoomo announced in an urgent letter of demand released on Thursday.

This comes after Amushelelo joined Craft Bistro employees who were demonstrating against alleged unfair treatment by their employer in Windhoek.

Amoomo said “in as far as the unlawful arrest and detention is concerned, our client herewith demands payments of N$250 000.

“It is further our instructions that such arrest and detention was carried out unlawfully due to the absence of a reasonable cause.

“In tandem the arrest was carried out without any valid warrant of arrest, and in the event where such a warrant was obtained, the same was never displayed to our client,” he said.

According to Amoomo, Amushelelo’s detention was also unlawful, because he was unlawfully arrested.

“It is further our instructions that members of the Namibian Police relied on violent conduct and dispensed the same against our client when the said unlawful arrest was carried out.

“Our client was aggressively wrestled and painfully assaulted by members of Nampol,” Amoomo said.

He further demands the identity and full particulars of the police officers who arrested Amushelelo to cite and institute proceedings against them in their personal capacities.

“As a result of the above unlawful arrest and subsequent detention, aggravated by the violent and painful assault perpetuated, our client sustained serious injuries to his arm, endured pain and suffering, and his dignity, as protected by Article 8 of the Namibian Constitution, was thoroughly and exceedingly violated,” he said.

The police has been given a period of 30 days to respond to Amoomo’s demand.

“Failure to provide our office with satisfactory response will leave us with no option but to institute action proceedings against the office of the inspector general as well as the government of Republic Namibia,” he said.

‘Swapo is sitting on a timebomb that will soon explode’

Great-grandson says Von François ‘did a lot for this country’