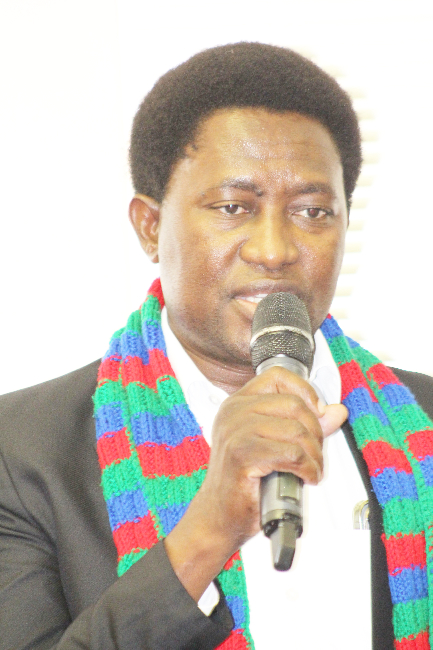 SWAPO’S regional coordinator for the Oshikoto region, Armas Amukwiyu, on Monday met with Ondonga King Fillemon Nangolo to seek his blessings ahead of the party’s elective congress.

The meeting took place at Nangolo’s traditional homestead at Onambango village in the Uukwiyuushona constituency in the Oshana region.

Amukwiyu on Monday confirmed he met with Nangolo to seek his blessings before starting his campaign.

“I went to Onambango to seek the king’s blessings, and also just to inform him that I am contending for the Swapo party secretary general post in the upcoming elective congress.

“I will also be travelling to Windhoek, and I do not want to go before I get his blessings and travel mercies,” he said.

Amukwiyu said he has a cordial relationship with the king, and they normally “consult on issues of national importance”.

“It’s not my first time going to the palace. It’s customary . . . I felt he must also hear it from me and not just from other people. It was more of a courtesy visit,” he said.

Amukwiyu was accompanied by Oshikoto governor Penda ya Ndakolo to the palace, as well as a number of regional and local authority councillors from the Oshikoto region and the Omuthiya Town Council.

Ya Ndakolo yesterday said he went to the palace on invitation of the king to discuss the drought in the Eengodi and Nehale lya Mpingana constituencies.

“We did not go there for political reasons. We went there with a different programme,” he said.

Asked about the seeking of blessings, Ya Ndakolo, who is a candidate for a position on Swapo’s central committee, said: “Maybe Armas went there to seek blessings. I went with a group of councillors.”

Frans Enkali, the secretary of the Ondonga Traditional Authority, said he was not aware of the meeting at the Ondonga palace as he is responsible for the administration of traditional authorities.

Amukwiyu on Tuesday attended a campaign for the upcoming elective congress in Windhoek.

This is the second time Amukwiyu is contesting for Swapo’s secretary general position after he lost to Shaningwa at the divisive Swapo elective congress in 2017.

University of Namibia Oshiwambo lecturer Petrus Mbenzi yesterday said seeking blessings from a king or an elder in the family is an Oshiwambo custom and is done to wish an individual luck.

Amukwiyu, Shaningwa, Shifeta, Nandi-Ndaitwah and Kuugongelwa-Amadhila, and those vying for deputy secretary general position started their campaigns in Windhoek on Tuesday.

They will be at Gobabis on Saturday and will then be visiting all 14 regions.

The Namibian previously reported that Amukwiyu was paid N$6 million from money diverted from the National Fishing Corporation of Namibia (Fishcor).

Amukwiyu returned a N$1 million vehicle to the Anti-Corruption Commission that was bought from these funds.

The two transactions are part of N$15 million transferred from Fishcor to Sisa Namandje & Co’s trust account in November 2015.

Last year prosecutor general Martha Imalwa said she had no reason to charge Amukwiyu over his alleged role in the Fishrot corruption scandal.