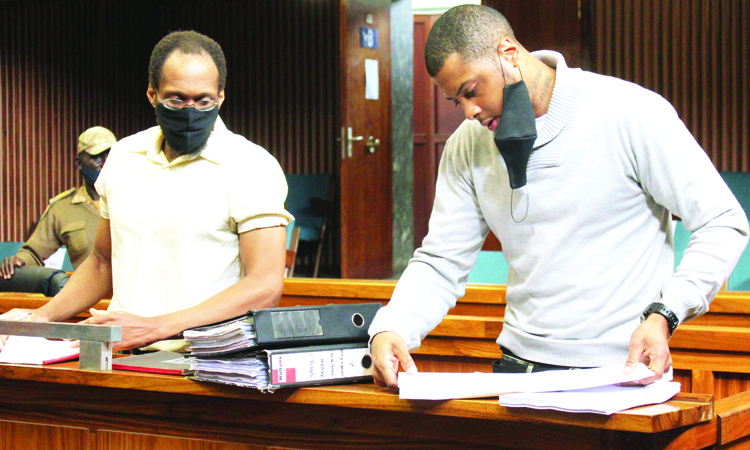 THE trial of two American citizens accused of having murdered a young man in Windhoek at the start of 2011 is due to continue in the Windhoek High Court in March next year.

The trial was postponed to the week of 14 to 17 March on Friday.

When it resumes, one of the police officers who investigated the killing of the 25-year-old Andre Heckmair, chief inspector Felix Ndikoma, has to return to the witness stand to continue with his testimony.

Heckmair died when he was shot in the head in a car in Klein Windhoek on 7 January 2011.

The state is alleging that the two men on trial before judge Christie Liebenberg in connection with Heckmair’s death, Marcus Thomas (37) and Kevan Townsend (36), had travelled from the United States to Namibia in late December 2010 to carry out a plan to kill Heckmair, who had lived and worked in New York City during 2010.

Thomas and Townsend, who were arrested in Windhoek on the evening of 7 January 2011, are denying guilt on six charges, including counts of murder and possession of a firearm and ammunition without a licence.

On Friday, Townsend’s defence lawyer, Mbanga Siyomunji, told Ndikoma that according to Townsend he was not informed of his constitutional rights after his arrest. Ndikoma disputed this and said he explained their rights to both Townsend and Thomas.

Siyomunji also charged that Ndikoma did not respect Townsend’s right to get legal representation and did not give him an opportunity to contact a lawyer and the United States embassy before he was questioned.

Ndikoma agreed that Townsend was not given a chance to call the embassy, and added that at that stage Townsend did not have the name of a lawyer he wanted to contact.

Ndikoma has recounted that the notebook was found among the two Americans’ possessions in the guest house room where they were staying before their arrest.

He also said the notebook disappeared from his office after the two men had been there to collect some of their belongings, and that he realised it was missing only after Hecht alerted De Klerk on 14 January 2011 that he had seen Thomas tearing pages out of a book and burning the pages in the cell they shared at Windhoek Correctional Facility.

The book, which had been photocopied before it went missing from his office, contained notes about firearm sound suppressors and barrels of the same types as a silencer and two barrels that were found in the room of the two accused, Ndikoma has testified.

Also in the book were notes recording the names of Heckmair’s parents and the phone number of a restaurant they owned in Windhoek.

Kanyemba claimed the remaining part of the notebook that was found under Thomas’ mattress in his prison cell had been placed there by Hecht. Thomas is also denying he was the author of the notebook’s contents, Kanyemba said.

Ndikoma told the court as part of his investigation he asked Thomas to provide him with a handwriting sample. He said when Thomas provided the sample, he pretended to write with his left hand, which he did awkwardly.

During his testimony in court he observed that Thomas has been writing notes in the dock with his right hand, he added.

Thomas is someone who can write with both his hands, Kanyemba said in response to that part of Ndikoma’s testimony.

Both accused have been held in custody since their arrest.

Their trial started before Liebenberg in November 2014.