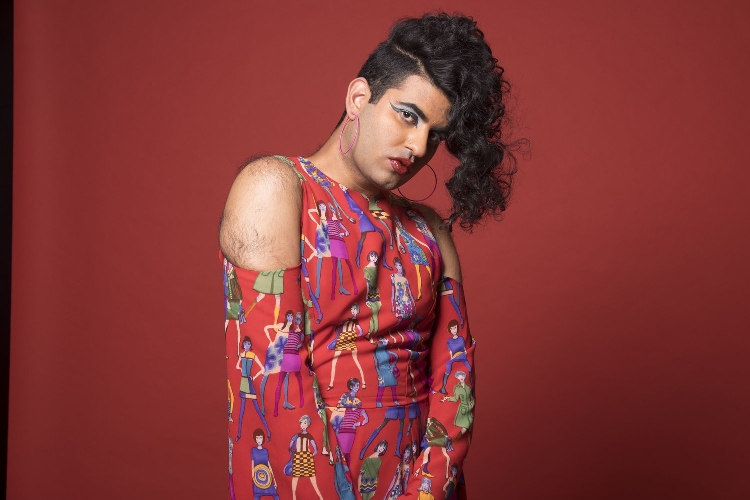 Nothing says next level like Namibia Pride announcing the imminent arrival of ALOK. The internationally acclaimed gender non-conforming, transfeminine,author, poet, comedian and speaker is in the country for a two-night engagement including a free book event at Swakopmund at 19h00 this evening and a comedy and poetry show in Windhoek tomorrow.

While the American mixed media artist has spent significant time on the continent, this will be ALOK’s first visit to Namibia.

“As a trans artist it’s always been important to me that my work not just be across genders and genres, but also across geographies. I was deeply moved by the conversations I had with LGBTQIA+ and feminist communities in Namibia during 2020 and at that time I resolved that I would come and visit in person as soon as I could,” says ALOK.

“Over generations these communities have created such powerful structures of community care and the ongoing story of both struggle and resilience is important for people all over to know. I am so honoured to be invited and looking forward to more meaningful cross-cultural exchange.”

This evening ALOK will be reading from the book ‘Beyond the Gender Binary’ (2020) which they see as a pocket-sized guide book for those interested in supporting or learning more about trans and non-binary people and rights.

“I kept on hearing from people that they wanted to express their support for trans and non-binary people, they just didn’t know how to respond to all of the arguments that are being used against us,” ALOK says.

“Also, I wanted to express how moving beyond the gender binary isn’t just a minority interest, it actually helps everyone,” says ALOK.

“Contrary to popular perception, moving beyond the gender binary doesn’t mean erasing peoples’ right to be a man or a woman, it means allowing people to self-author what being a man, being a woman, or any other gender means to them. In that way, it’s about honouring our complexity rather than prescribing conformity.”

The events are organised by Power Pad Girls and TIAMON with support from Equal Namibia. This evening’s free book event at the Swakopmund Plaza Hotel will feature Rachel Gawases, Pitti Peter and Namupa Shivute.

Tomorrow’s ticketed comedy show in the capital includes special guests Umlilo (SA) and Joshua Allen (USA), as well as appearances by Naris, Miss Mavis, Mo’Nick Critique, Gigi Has Arrived, Selena Dash, Coco Critique, Starr Has Arrived, Janice Tobias, Jonathan Sasha and DJ Rise Elders. The proceeds of the show will be donated to TIAMON to continue their work in assisting the transgender community in Namibia.

“The show in Windhoek is my comedy and poetry show that I’ve been touring across the world the past year. Everyone is invited!,” says ALOK.

“I believe that art is a vital form of medicine. We all carry so much trauma from growing up in a world that is so often cruel and relentless, and I just want to bring hope and comfort that makes it a little bit easier to get through the day. Often women and LGBTQIA+ communities have been the butt of the joke in comedy, but we’re changing that,” says ALOK.

“With humour, grace, and panache of course.”

‘Beyond the Gender Binary’ (comedy and poetry show) will take place at Brewers Market in Windhoek at 19h00 tomorrow. Tickets are available at Pick n Pay and from Webtickets.