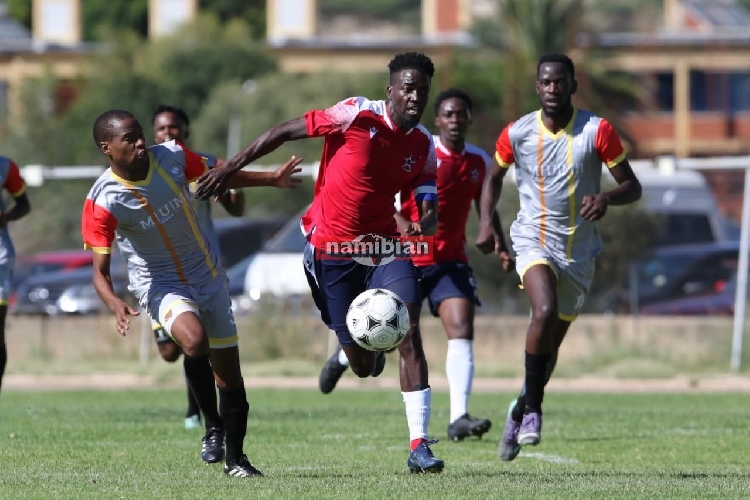 ALL roads lead to Otjiwarongo this weekend with Life Fighters hosting African Stars in their traditional derby match tomorrow afternoon.

The fact that they occupy the top two spots on the Debmarine Premiership log has added extra spice to the encounter and a big crowd is expected to converge at the Mokati Stadium.

“We expect a capacity crowd – it’s the clash of the titans. Number one playing number two on the log is in itself a crowd-puller, but with the added history between the clubs, it’s going to be massive,” Life Fighters’ commercial director Terry Ujamba said.

“We are putting measures in place and won’t allow cars inside the stadium, they will have to park outside,” he added.

Stars have opened up a four-point lead at the top of the log, but Life Fighters, who also host Young Brazilians on Sunday, can close the gap by picking up some points, while Stars must still travel to Rundu for a tricky tie against Julinho Sporting on Sunday.

Ujamba said they were injury free and ready for the match.

“We don’t have any injury concerns and all the players are fit and ready. Our coach, Agnus Elemu, is doing great work and we recently made some very good signings – we have brought in a Nigerian defensive midfielder and two promising offensive players from first division clubs.

“We are building with a very young team including a 16-year-old, who I believe is the youngest in the league,” he added.

Kake said they were ready for Stars.

“I don’t want to talk about African Stars much – all I can say is we are bringing it on to them. We know how to expose them and we will show what we are capable of.”

Stars are well prepared, with two of their teams reaching the final of a tournament which also included Tura Magic and Unam last weekend, and coach Mervin Mbakera said they are ready.

“We have adopted a winning mentality and a great work ethic – we go into each game with the philosophy of getting three points and that’s how we will approach this weekend’s game.

“We had some good preparatory games last weekend which was satisfactory and now we are in our last preparation week and so far it’s adequate,” he added.

Mbakera said they respected Life Fighters and called on their fans for their support.

“Considering their position on the log, it shows their pedigree, so we respect them and are preparing appropriately. I’d just like to call on Stars supporters to come in numbers for both our matches – come and be the 12th man as you have been for all these years,” he said.

Blue Waters, meanwhile, will be keen to get back to winning ways after losing 4-0 to Stars in their final match before the festive season. That defeat saw them dropping down to third place on the log on 15 points, four behind Stars, but their manager Robert Shimooshili told Desert Radio that it is still early days and that he is not too concerned.

“Even though we lost our last game, which was disappointing, I’m not too worried because I know where the errors were – we had some injuries and some players were suspended due to yellow cards, but overall we are on track,” he said.

“We are ready to host Pirates and Tigers this weekend, and to display quality football. There are still many matches to go and our short term aim is still to win the league this season,” he added.

In other matches, fifth-placed Civics host Okahandja United (fourth) and Mighty Gunners (sixth), while Black Africa will hope to continue their winning run when they play Tura Magic and Unam at the Unam Stadium.

BA have had a poor run, and are currently second last on the log, but their former star midfielder Lolo Goraseb said they are in a rebuilding phase with an exciting young squad.

“In life in general, and currently with Black Africa, you get the cycles, where you perform well and you have a good team that you build over time, but then you have to replace them with a new generation of players to start building a new team. This is where BA currently is and of course our performances so far have not been good, but we are confident and building a new team with young players and moulding them into another great Black Africa team,” he said.