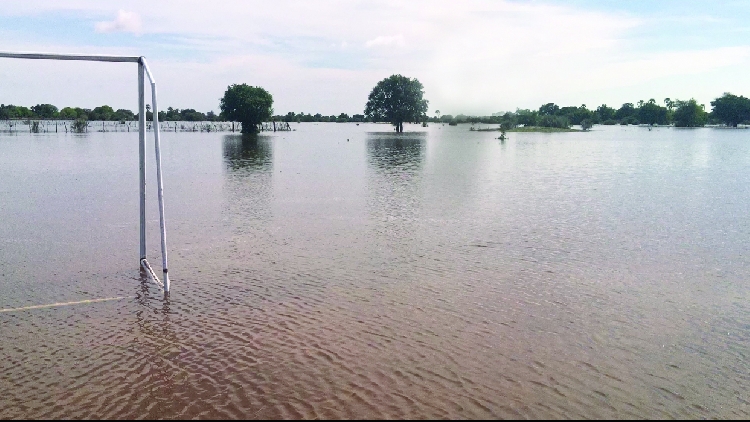 MORE than 70 households in the Ohangwena region are currently surrounded by water caused by a flash flood that originated from Ondjiva and Namacunde in Angola’s Cunene area.

The flood water has reached Namibian villages close to the border, affecting the mobility of residents and threatening the closure of nearby schools.

Senior hydrologist in the Ministry of Agriculture, Water and Land Reform Leonard Hango has cautioned residents of Engela and surrounding communities to take precautions when crossing streams.

“This is especially for the schoolchildren of Onghala, Oimbadalunga, Engela, Oihaingu and other villages. Parents must ensure that the children take safer routes to schools and they must be escorted,” Hango said.

Engela, Onghala and Ouhongo villages are currently surrounded by flood water, which arrived from southern Angola on Friday at Oimbadalunga village.

Many homesteads in the Onghala village are surrounded by flood water, including schools in the vicinity such as Onghala Combined School.

When The Namibian visited the site of the flood water over the weekend, it was at Ouhongo wa Mwatetange village heading to Endola.

Ohangwena regional governor Walde Ndevashiya visited the flooded areas on Saturday, including Onghala Combined School. Ndevashiya said while flood water is a blessing, it also poses a danger to the community.

“This is especially [dangerous] to the schoolchildren and elderly people, including vulnerable people. These people must be assisted when crossing the oshanas,” he said.

Ndevashiya said they do not want to record any lives lost due to drownings in the flash floods.

“This water is a lot and is flowing fast. People must take the necessary precautions to ensure they are safe.”

Ndevashiya said those who built structures in the pathway of the flood water are at risk.

“This is because over the years, as a country we have not been receiving heavy rains or floods. Out of ignorance or people doing it deliberately for some reasons, they built in flood-prone areas where floods used to flow all those years [ago],” he said.

He urged affected residents to move to higher ground if possible and not solely rely on the government to relocate them.

“We are ready to assist. We have a regional disaster risk management committee which deals with these issues, but while we do that we need cooperation from community members for us to be able to make sure that the situation is under control,” he said.

Engela constituency councillor Elkan Hainghumbi, who has been on the ground since the floods started last week, also said the water is flowing at a fast pace.

Hainghumbi warned residents to avoid travelling at night for their own safety.

“Parents, take care of the children. Do not let them in water. There are strange things in these waters, which are dangerous,” he cautioned.

The government is ready to assist residents if anybody needs to be relocated, Hainghumbi said.

“There is land available for relocation of people. However, all village roads are blocked by flood water making it difficult to access these areas,” he said.

It was decided yesterday after a meeting with Engela’s constituency councillor and management to use a helicopter to see how far the water has reached to determine who needs immediate assistance.

Johannes Stephanus, a resident of Onghala village, said when he woke up on Saturday, the houses were surrounded by water.

This happened because the water is flowing in two oshanas, Stephanus said.

“These waters travelled for two days from Angola. We are not ready for it. It’s a lot and we might need government assistance,” he said.

Access to services are blocked by the water, making it difficult for them to cross the streams, he said.

Another resident of Uuheke village in Engela, Fudeni Festus, said the water caught them by surprise as the oshanas were dry on Friday afternoon.

“We heard of the flood but we thought it was still far. Surprisingly, we woke up surrounded by water on Saturday morning,” Festus said.

According to him, the path to get to their homestead is blocked by flowing water which is also flowing in the direction of their house.

“This water is fast and a lot. It did not take 24 hours to arrive in Namibia. I’m urging my fellow Namibians not to go in these waters because it’s dangerous. There are frogs croaking there but they are not real frogs, they are snakes. So take care,” Festus warned.

He said they will move out of their house because the water is near their homestead.

“Another thing is our children who go to school. It’s a risk for them, most especially those who attend school at Onghala Combined School and Ndilokelwa Primary School, and who live across the flood stream. They might not go to school on Monday,” he said.

Onghala village headman Freddy Paulus said about 70 houses in his village are surrounded by flood water.

He said their animals are in danger as they are only grazing on higher ground.

“If water increases by today, many people will be relocated. You cannot go to our houses without going in water,” he said.

David Hanghuwo, a resident of Engela, said the water has been increasing for the past three days.

Hanghuwo said he is particularly concerned about the school children who live on the other side of the flood stream and who attend school at Engela.

“They are blocked by water. You cannot cross that stream. You will drown. I think the only option we will have, although we don’t have it, is water canoes, to try and get them on the side of Engela. The government must help them,” Hanghuwo said.

He said they are approximately four kilometres away from the borders of Namibia and Angola.

Asked whether there are frogs and fish in the flood water, Hanghuwo said there are small and big fish, and he had caught five catfish on Sunday morning.

“Frogs are croaking but I don’t trust those because it did not yet rain. But if rain continues, we are in a serious problem,” he said.

Onghala Combined School is situated at Engela and there is a gravel road leading to the school, however, flood water has started crossing the road.

Hainghumbi said the road may be eroded by midnight.

“We will have a meeting at the school by 07h00 on Monday with the education director and the chief regional officer to see what can be done. Parents must prepare their children to go to school and we will communicate later,” Hainghumbi said.