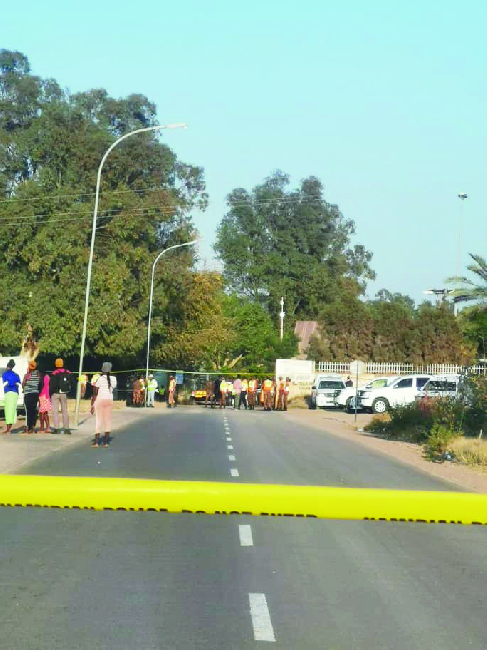 MORE than 3 000 residents of Endombo compound at Tsumeb were evicted after they failed to pay their rental fees on Monday.

he residents have been served with eviction orders since 2017, however, many failed to settle their outstanding dues, and were subsequently evicted.

Many of the residents are pensioners and low-income earners who survive by doing odd jobs.

Resident Martin Martinus has been living at Endombo since 2004.

He says he and other residents were brought to the compound by the landlord, Christo Groenewald, and they signed a contract with him.

Martinus says since 2007, his rent has increased by 10% each April.

Martinus says Groenewald gave them a fake paper of ownership containing the number 3258/2006, which caused them to stop paying rent.

“He must give us proof that it’s his property, then we can pay rent, because when we called the Deeds Office, they told us that the title deed belongs to someone at Katima Mulilo, which means he has fake documents,” says Martinus.

He says the municipality must give them permanent land to live on.

Tsumeb deputy mayor Anmire Garises told The Namibian that the residents of Endombo compound were evicted due to years of unpaid rent.

“Yes, it’s true the residents have been evicted; many of them have not been paying since 2017 to date.

“The residents were supposed to be evicted in 2020, but after the municipality intervened, the owner of the place decided to have mercy on them but they still continued to dishonour their rental fees until they were evicted,” she says.

Garises says the municipality has made approximately 40 erven available to some Endombo residents to construct their own houses, however, only six residents managed to pay for their erven.

The municipality has accommodated some of the residents who were left homeless after the eviction at the stadium for a period of 30 days, while some will be given erven at a later stage.

“We really hoped to assist all the residents, but we have no means to do so. However, we will continue to seek alternative measures to assist our people, but unfortunately we cannot assist them with much at the moment,” says Garises.

Groenewald confirmed that at least 40 families were removed from the premises.

“I have a court order to remove them, after there has been talks and negotiations between us, the municipality and politicians on how to accommodate and assist them,” he says.

Tenants can express themselves however they want in court, and talks that he provided a fake title deed are not true, he says.

“It’s nonsense, I bought the property in 2002 and transferred it in my name in 2006 for my business.

“In 2017, all of a sudden the tenants stopped paying rent. Everyone pays for their settlement, even with the bank you pay, but they stopped paying for rent.”

Groenewald says he was left with no choice but to evict the residents.

“They have occupied a land next to my property but that’s now the municipality’s issue,” he says.

In March 2020, Popular Democratic Movement (PDM) leader McHenry Venaani tabled a motion in parliament for Endombo to be expropriated and that fair compensation be paid. He proposed that the land be expropriated to establish decent housing for the residents.

Endombo has been a bone of contention since 2017, when Groenewald first wanted to evict defaulting tenants.

‘We will make sure the legacy continues’ – Witbooi

Narrow escape for fishermen as vessels collide in fog