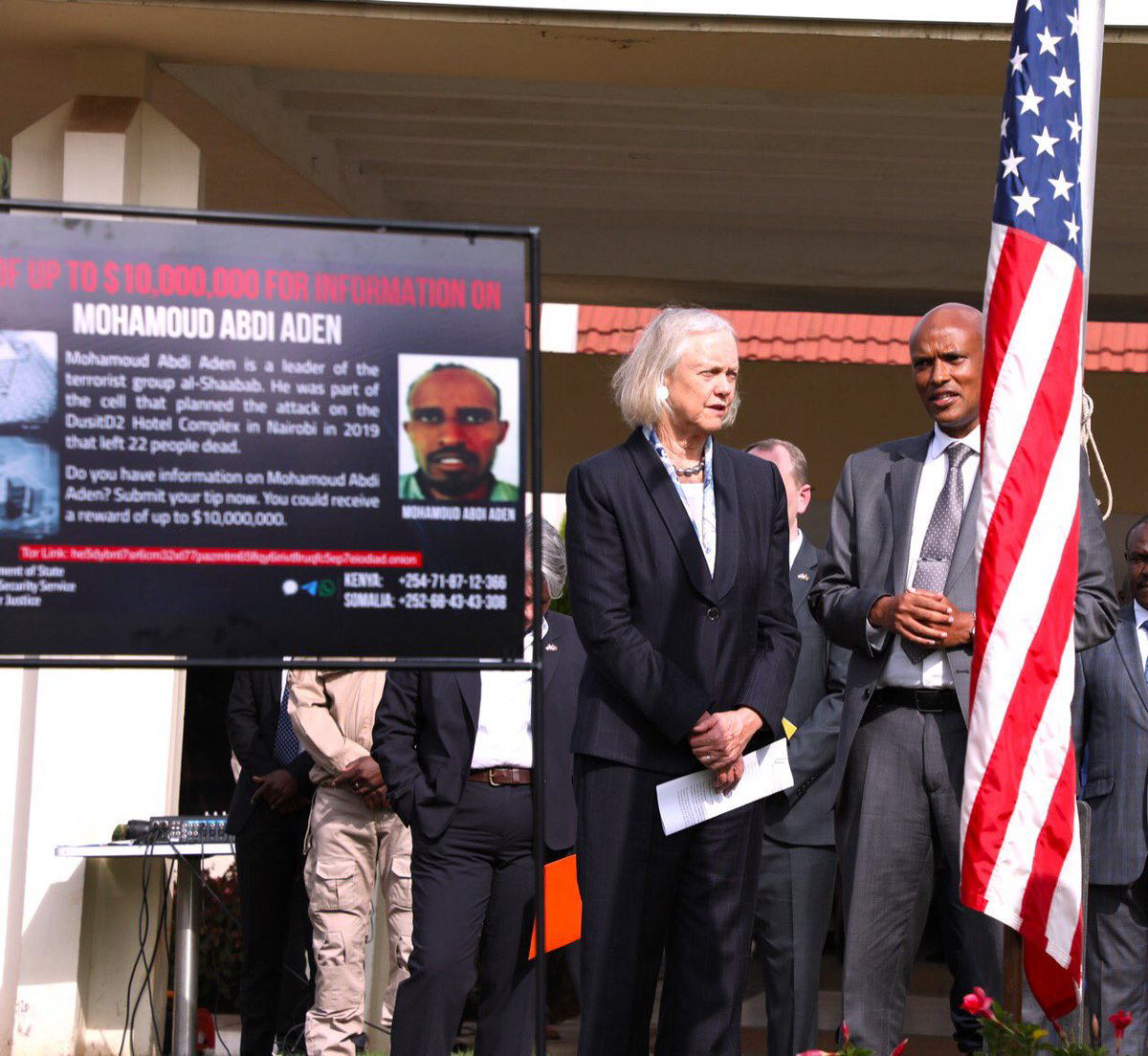 The United States announced Thursday it was offering a reward of up to $10 million for a man described as the “terror mastermind” of a bloody hotel attack in Kenya four years ago. The price reward is in terms of the US State Department’s Rewards for Justice (RFJ) program.

The department said it is seeking information on Mohamoud Abdi Aden, describing him as a leader of the Somalia-based Al-Shabaab jihadist group that has carried out several deadly attacks in Somalia and neighbouring Kenya.

On January 15, 2019, Al Shabaab gunmen, armed with explosives, automatic weapons, and grenades, attacked the dusitD2 building, a six-storey complex of shops, offices, and the hotel. At least 21 people, including one US citizen, were killed in the assault. The bloody assault lasted almost 20 hours.

At least 21 people lost their lives, including a US citizen, and many more were injured. Kenya said at the time that all the assailants had been eliminated.

“Mohamoud Abdi Aden, an Al-Shabaab leader, was part of the cell that planned the DusitD2 hotel attack,” the US ambassador to Kenya, Meg Whitman, told reporters in Nairobi.

She said the US was offering a reward of up to $10 million for information leading to the arrest of Aden, described by the embassy as a Kenyan national, and others accused of involvement in the hotel siege.

The head of Kenya’s Directorate of Criminal Investigations, Amin Mohamed Ibrahim, described Aden as the “terror mastermind” behind the carnage.

The State Department designated Aden a “specially designated global terrorist” in October last year. Al-Shabaab has repeatedly targeted Kenya since it sent its army into Somalia in October 2011 to fight the Islamist militant group.

A series of bloody attacks

In 2015, an attack on Garissa University in eastern Kenya killed 148 people, almost all of the students. Many were shot at point-blank range after being identified as Christians.

It was the second bloodiest attack in Kenya’s history, surpassed only by Al-Qaeda’s bombing of the US embassy in Nairobi in 1998 which killed 213 people.

Al-Shabaab, which has been waging a bloody insurgency against Somalia’s fragile central government for 15 years, has been designated a terrorist group by the US since 2008.

In November, Washington said it was increasing its reward to up to $10 million apiece for key Al-Shabaab leaders including “emir” Ahmed Diriye.

The United States usually offers hefty lumpsums to whistle-blowers who successfully divulge aiding information for the arrest of dangerous criminals such as terrorists and drug lords.

US Pledges $55 Billion to Africa’s Development Over Next 3 Years | The African Exponent.

Common Causes of Discomfort and Solutions in Cycling | The African Exponent.